When we are very close to the beach, we see that the cannibals are around the fire. They start to eat the first prisoner. The second prisoner is still alive. He isn’t one of Friday’s people. He is European. The cannibals want to eat him too. I decide to save him if it’s possible.

We move closer to the cannibals but we are still hidden behind the trees. Twelve cannibals are still around the fire, but two cannibals go for the white man.

When I see this, I prepare the guns. I ask Friday if he can do the same.

Then we shoot quickly at the cannibals from six guns. We kill 3 and seriously injure 2 of the cannibals. The other cannibals jump up. But they don’t know where to run. They don’t know from which direction the danger comes. Some run to their canoes. Some stay on the beach.

We continue to shoot. We shoot three other cannibals. After that, we take our guns and we run to the beach. We shout very loud. I run to the prisoner and Friday shoots another cannibal who is near.

I free the European. He says something in Spanish to me. I give him a gun. He is weak but he can shoot.

The cannibals are shocked by our quick attack. Our unusual guns scare them a lot.

Only two cannibals try to fight us. We shoot them with our guns. Friday fights very well. He quickly kills one cannibal who is injured. The second injured cannibal runs to the forest. Friday runs after him and he kills him with his knife.

Only three cannibals are able to run away. They jump in their canoe and they start to leave. Friday shoots at them, but he doesn’t hit them. It’s dangerous to let them go because they can tell their people about us.

We want to jump in one canoe and we want to follow them. But to our surprise, we find another man on the bottom of the canoe. He is scared. He doesn’t see the fight. He only hears the fight. Ropes are around his neck. He is in great pain. It’s difficult for him to breathe.

I quickly cut the ropes. When Friday sees him, he starts to cry. Then he laughs and he hugs the man. Then he jumps and begins to dance around him. Then he cries and laughs at the same time. 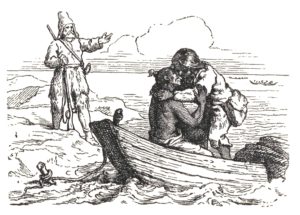 When the strongest emotions are gone, Friday tells me that the prisoner is his father.

I feel tears in my eyes when I see the son’s love for his father.

This happy incident delays us and the cannibals are already gone.

When they talk, Friday suddenly jumps up. He runs to the forest very fast.

When he comes back, he has a bottle full of fresh water. He gives the water to his father who is extremely thirsty.

After he drinks, I ask Friday to give the rest of the water to the Spanish. He needs water very much too.

The Spanish thanks me a lot. He has problems to walk. He is very weak. I ask Friday to massage his feet too. It helps him.

Then, I want to help the Spanish go to the canoe because it’s very difficult for him to walk. We want to take our new guests to our house.

But Friday is young and strong. He has a lot of power. He takes the Spanish on his back and carries him to the canoe. He carefully puts him inside the canoe.