Robinson Crusoe in Levels is a book for students of English.

Students can read this book in three levels.

I was born in England in 1632. My father was German and my mother was English. I had two brothers and one sister. We were a good family.

My father was a good businessman. We had a lot of money. I had good education. I had a good life. But I also had a dream. I wanted to travel by sea. I wanted to see the world.

My father was a good man. He wanted the best for me. But my dream wasn’t his dream. He wasn’t happy. The situation wasn’t easy.

I thought about my father’s words. Travelling by sea was dangerous. It wasn’t comfortable. I could die. But it was also very exciting. I could see new countries. I could meet new people.

I thought about travelling by sea every day. It was difficult to be at home.

I tried to speak with my mother. I told her, “I would like to travel by sea very much. I want to see the world.”

I told her, “Please, help me speak with my father. Maybe with your help I could travel by sea.”

One year later I visited Hull, a town in England. It was the 1st of September. It was the year 1651.

I met my friend. His father had a ship. They travelled by sea very often. Their next journey was to London. My friend told me, “Go with us.” 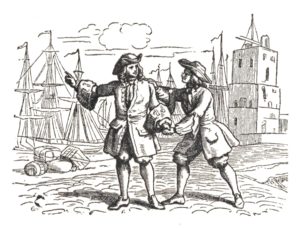 I thought about it. I wasn’t prepared for this journey. But I could try if travelling by sea was for me. So I went to London.

I was very happy. It was my first journey by sea. It was very exciting. The first hour was great. But then we started to have problems. We saw a storm. It was closer and closer. The wind was stronger and stronger. The waves were bigger and bigger. The ship went up and down. I had fear. I thought about my home. I thought about my comfortable bed.

The storm was finished in the morning. The weather was nice the whole day. And the evening was beautiful. Everything was so quiet.

One man came to me. We talked. He made some jokes. They were funny. He asked me about the weather. I told him about my fear during the storm. “What storm?” he said, “The little wind?” he laughed.

He offered me a drink. I drank a lot. Soon I was drunk. I slept very well at night.

The next day, another storm came. The storm was bigger. I was really scared.

I saw that the other men were scared too.