I was very pleased when my work was finished. Everything was well organized. I could easily find what I needed.

I also wrote what I thought. It was good for me when I put my thoughts on paper.

After some time my days on the island started to be similar. But they were never boring. I had always something to do.

Every morning, I walked for a few hours. Then I worked until noon. I had lunch. Then I slept after lunch for two hours. Then I continued my work until the evening.

I made my cave bigger with the tools which I had. I wanted to have a big cave. 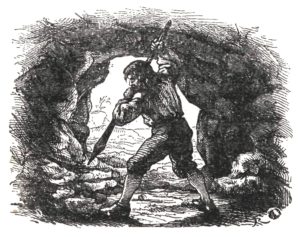 The cave was my kitchen, living room, cellar and sometimes a bedroom all in one.

First, I had to clean the cave. Then I decided to put long boards on the sides and also on the ceiling. I didn’t want the accident to happen again. This work took about one week.

In December I continued to work in my small camp. The weather wasn’t very good for twenty days. It rained day and night. But it was still warm. So I worked inside. It was never cold on the island. It was good for me.

At the end of December I killed a goat. I also hurt another goat. Its leg was broken. The goat couldn’t walk. I took the goat home. I looked after it. After two weeks the goat wasn’t scared. It could eat from my hand. I started to think about keeping animals. I could have food when my gunpowder was finished.

In January I traveled through the island. I found more goats in the centre of the island. The animals were very shy. It was difficult to get close to the goats.

I wanted to try to domesticate some goats. I only needed an opportunity to do it. I had a plan. I returned with my dog the next day. He was my hunting partner.

I told my dog, “Sit down. Wait. Don’t move.” Then I went around the goats but in a big distance.