I had my first corn at the end of December. It wasn’t a lot of corn. I didn’t want to eat the corn. I decided to keep all the seeds. My goal was to put the seeds in the ground again and have more corn later.

I thought, “I will need some pots for the seeds. I will look for clay around the island.”

I found some clay. I tried to make a pot. I had no success at the beginning.

People in England made beautiful pots. But I didn’t know the whole process well enough to be able to make pots.

However, I tried again and again. It was a long process but after two months of experimenting and trying I made two large pots.

I continued to make small pots. Their quality improved. I also made long but not very high pots. I put sea water in these pots. When the water was gone, I had salt.

One day, I found a broken piece of one pot in the fire. The fire made the piece as hard as stone and it was very red too.

This gave me a good idea. I took one pot and made a fire around the pot. The pot was very hard after a few hours. I was happy with the result. 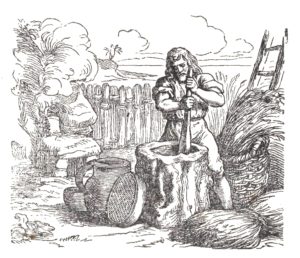 The flour stayed on the bottom of the hole.

I thought, “I will need something to bake bread.” I had an idea. I mixed the flour with water. Then I took two stones. I put the stones near the fire. When they were very hot, I put the bread between the stones. This was how I made my first bread on the island. It was during my third year on the island. The bread wasn’t perfect but I liked it a lot. It was my first bread after a long time.

I thought about travelling around the island by sea. I thought that it was possible to make a canoe from a big tree. I found one big tree. I cut the tree and I started to make a hole in it. 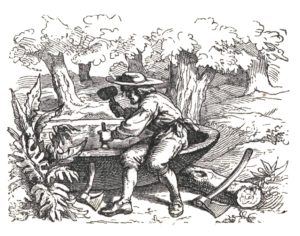 One day, when I was working on the canoe, I realized that I didn’t know how to move it from the forest to the beach. I tried everything to move the canoe. I even thought about digging a channel, but it was all useless. There was a hill between the forest and the beach. I was really sad that I had to leave the canoe in the forest. Many days of work were lost. I didn’t believe that I could make such a mistake. I had to plan my work better next time.