When I came to the mark of the foot, I saw that it was much bigger than the size of my foot. It was impossible that it was my foot.

I was scared again. I started to panic. I thought, “I will destroy my corn fields and my valley house. I have to hide my activity on the island.”

I was so afraid that I couldn’t sleep the whole night. I finally slept a little in the morning.

My head was clear when I woke up. Now, it wasn’t so strange that people lived on the islands around. I thought, “Maybe it was their first visit here. Maybe they won’t come again.”

I felt better after these thoughts. But still, I wanted to be safe.

During the following month I made another fence around my house and I made holes in the fence through which I could easily fire guns if I was attacked. Now I had a house which was very well protected. Nobody could come easily near me.

I also worried about my goats. I divided the animals into two groups. I built a smaller fence in another part of the island. I put one group of the goats there. It took me a lot of time, but my animals were safe.

It was the sixteenth year of my life on the island when something very sad happened. My dog died. I was crying for three days. I went to my goats and I told them how sad I was. They didn’t understand my words but I felt that they understood me. They felt my emotions. They were unusually calm and quiet.

It was now two years after the foot in the sand on the beach. One day, when I was walking on the beach, I thought that I saw a canoe far in the sea. I wasn’t sure, so I just continued my walk.

Then I saw a thing which shocked me. The beach was full of parts of human bodies. Heads, hands, feet, fingers and teeth were everywhere. There was a black place after a fire. 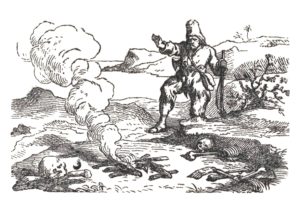 I was angry and scared at the same time. “They were here again,” I thought.

I couldn’t look at this horrible scene for a long time. I had a horrible feeling in my stomach. I went back home and I thought about what to do.

I decided not to go out to sea with my canoe because I had no chance against a group of cannibals in the open sea. I also decided not to use guns because the sound of a gun was very loud. But I always had guns with me for protection.

I started to think that maybe in the future I could kill some of the cannibals and save their prisoners. I started to look for a place near the beach where I could hide and prepare for the attack.

Then I changed my opinion. I thought that it wasn’t reasonable to fight the cannibals. I didn’t know these people. They didn’t attack me. Maybe, it wasn’t good to attack them.

Finally, I stopped the preparations and I decided to act only if they attacked me first.