Two days later, I shot a young goat. Friday was scared of the gun. He didn’t understand how such a small thing could kill a goat. He didn’t want to touch the gun.

Later I saw how he talked to the gun. He probably asked the gun not to kill him.

We took the goat. We made a nice soup. Before the soup was finished, Friday went to the forest and he brought some herbs. He put the herbs into the soup. The herbs were similar to pepper. The soup smelled fantastic and it tasted fantastic too.

We cooked some of the goat meat the next day with sauce. Again, Friday brought some herbs and also plants. The herbs made the sauce taste great. They made a big difference. And we made a nice salad from the plants.

I taught Friday how to prepare corn and bake bread. He could do it as well as me a few days later.

Then we started expanding my garden to have more corn. In all activities, Friday helped me a lot. He was also very good at catching fish. Our cooperation was simply great. We were a good team.

I wanted to teach Friday to speak English very well. I wanted to teach him English as fast as possible. I wanted to be a good teacher. I took my role very seriously. I thought about the best method to teach him English. When I spoke to him fast and when I used all the words and grammar, he didn’t understand me. So I tried to speak mainly in the present. And I used simple words. I also said only short sentences. This way, Friday understood more. We spoke about many topics.

When Friday didn’t understand something I pointed at it. Or I tried to explain the word to him. If it didn’t help, I made a picture of the thing in the sand. 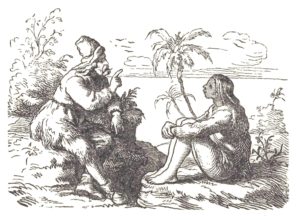 Soon Friday started to understand many of my sentences in the present. He also started to use some words. His pronunciation was very bad at the beginning. But it wasn’t important for me. I understood him. And I was very happy that somebody spoke to me.

Friday was a good student. He was clever and he was improving quickly. Soon he could say some words like an Englishman. Of course not all the words. But the words which he said correctly made me very happy.

I saw that Friday very often repeated aloud what I said. I think that it also helped him to learn so fast. I thought, “Learning a language is quite easy. You only need to copy what you hear and if you don’t understand something, you need a picture of it. Then you need a lot of practice. This is the best system.”

Friday’s progress was fast. He was able to talk more and more every day. In a couple of months we could have a basic simple conversation.

Friday liked my tools. They were very interesting for him. He especially liked the telescope. He borrowed the telescope very often. He went to one of the hills. And he watched everything around.

Once, I asked him about his people and how he became a prisoner. He told me that they ate human meat like their opponents. In fact, in the past he did a ritual on the other side of my island. He was probably one of the cannibals who I saw a long time ago.

He told me about the sea and the currents in the sea. Thanks to Friday, I learned about the history, culture and traditions of his people.