I said, “I’m willing to help you but I have one condition. I want full control over the ship if we manage to get it back.”

The captain and the other two prisoners agreed and they gave me full control over the ship and over their lives.

We freed the prisoners. Then we went back to the forest. I gave them guns and we started planning the attack. In the middle of our conversation, we noticed that the sailors who stood guard were woken up. They stood up. They shouted to three other men who were near to them. At that moment, we shot the guards. Then the captain spoke to the three other men. He told the men to be loyal to him and help him get back to the ship. They agreed and we tied them and left them on the beach.

The other three men who heard the shots came back. They saw that the situation changed. We were five. We had a lot of guns. The situation was bad for them.

They also agreed to be loyal to the captain. We tied these men too. 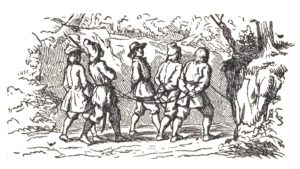 We hid our six prisoners in the forest. Then I and the captain had finally time to talk to each other. I told him my story and he was shocked. He also thanked me a lot for my help.

He and his two friends were hungry, so we went to my house. I showed them what I built during my years on the island. They were surprised by all things which I had.

However, we didn’t have much time to explore my home. We had to plan how to get back the ship. There were sixteen people on board and we were only five.

First, we decided to take everything out of the boat. We thought that the sailors could send another boat to the island if the men from the first boat didn’t come back with the next high tide.

In the morning we heard the ship fire a gun as a signal for the boat to return. After a while, the ship fired a few times again. There was no response. Then we noticed that the sailors took another boat and went to the beach.

We saw eight men and they all had guns. The captain told me that six of the men were still loyal to him, but there was also the man who started the rebellion. The captain thought that it was difficult to beat them. But I told him that we had a good chance to win. But we had to act quickly.

The captain trusted two of our prisoners. They promised to fight on our side. We gave them weapons. We were prepared with seven men ready to fight. We waited for the arrival of the boat.

When the boat reached the beach, the men jumped out of the boat. They pulled the boat on the beach. Then they ran to the other boat. They were surprised when they saw the boat empty. They tried to call their friends. They shouted. 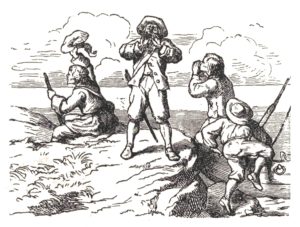 Then they shot in the air but it was all useless. Nobody shouted back. The sailors were confused. They didn’t understand the situation. They started putting the boat into the water again.

It looked like they wanted to go back to the ship to inform the others that there was a problem.

When the captain saw this, he was afraid that they could go back to the ship and leave the island forever. Fortunately, in a few seconds the sailors changed their plan. Now, they left three men in the boat. The other five men went to the forest to look for their friends.