We continued watching all the actions of both groups. The five men in the forest sat down under a tree. They discussed what to do. They even argued a little.

After a long conversation under the tree, they got up. Then they walked to the beach. They probably gave up looking for their friends.

We had to do some action quickly. It was important to do something before they reached their boat.

I had a plan. I told the assistant to go with Friday more to the centre of the island and shout at the sailors. When the sailors heard this, they shouted back. Then they started going in the direction of the voice.

Friday and the assistant continued shouting back. They started to take the sailors to the opposite side of the island. This strategy worked as I planned. The five men were soon very far from the beach.

This was very good for us. We went to the three men in the boat. We explained the situation to them. They decided not to fight us. They became our prisoners too.

After some time, Friday and the assistant returned. They went with the sailors very far from the beach. The sailors couldn’t return sooner than in two hours.

We hid and we waited for them. They were very tired when they returned. First they went to the boat. They were surprised when they didn’t find the three sailors.

They started calling their friends. But nobody answered. The leader and two other men started to walk to the forest where we hid.

The captain and Friday attacked them when they were close to us. The leader was killed immediately. The second man was injured. The third man ran back to the boat.

Then we all went out of the forest. We ran to the boat. The captain spoke to sailors. He asked them to give up. When the sailors understood the situation, they dropped their weapons quickly.

We decided to tie the prisoners. But we didn’t tie all of them. The captain trusted three of the men. We didn’t tie these three men.

Now, we were ten men. We started to plan how to get the ship. After some discussion we knew what to do.

Friday and I stayed on the island. We had to watch the prisoners.

The captain, his assistant and the passenger took the clothes of some of the prisoners. They wanted to look like them. Then the captain and his sailors took the boat. They went to the ship.

When they were near the ship, they spoke to the men on the ship. They told them that it wasn’t possible to find the other men.

When all of the men from the boat were on the ship, the captain showed himself and the attack began.

Some sailors were injured in the battle. Only one person was shot. It was the second leader of the rebellion.

When the captain had his ship again, we heard seven shots. It was the signal that the ship is in captain’s hands again. I was happy when I heard the shots.

Soon the captain went back to the island. 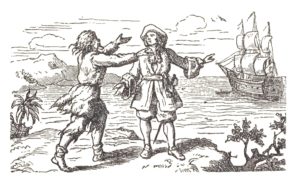 We hugged each other. He told me that the ship was now under my control. I was so happy. I started crying so much that I wasn’t able to speak.

It took me some time before I could stop crying. Then I was able to speak again. I spoke to the captain. I told him how happy I was.

The captain ordered his men to bring a lot of food from the ship.

We had a nice meal. We celebrated our victory and my departure from the island.

We drank expensive wine. We ate pork, beef and vegetable. We ate biscuits for dessert. I was very happy when I tasted this food again.

The captain gave me clean clothes. I didn’t wear clothes for a long time. The clothes were very light. They were a little uncomfortable first. But it was soon fine.

When the party finished, we discussed what to do with the five prisoners who the captain didn’t trust. The men were really horrible. The captain didn’t want to take the men on board the ship as prisoners. They were too dangerous.

We put them in the cave. The cave was now the prison. I told them to wait for more orders.