One day, I was still working on the cave when a storm appeared.  There was lightning, followed by a loud thunder. It came to my mind that lightning could hit one of the boxes with gunpowder. It could destroy everything and even kill me. I was scared. As soon as the storm went away, I opened the big boxes with gunpowder. I started dividing the gunpowder into bags and smaller boxes, which I then hid in the rocks. I had a lot of powder, so this took me three days.

I also went hunting every day. It was a break from the hard work and it provided me with meat. I also started to know the island and its inhabitants better. I discovered some goats and I hunted them. Then I had enough meat.

I often walked along the beach and I regretted my choice to travel by sea. I knew travelling by sea could change your life completely. It could be great but it could be horrible too. I knew my friends from the ship were dead. It was horrible.

On the other hand, I was alive. And I was grateful for that. I was also lucky to have all the tools, food, clothes and guns from the ship. Without them I could hardly survive a week.

I decided to make a big cross. I put it on the beach. It was near the place of my arrival to the island. 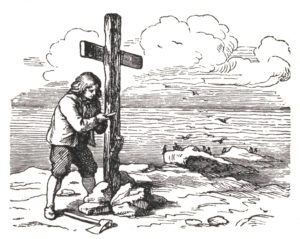 I wrote on it the date of my arrival. It was the 30th of September, 1659. I wanted to keep information about time. The cross was my calendar.

I made a small cut in the cross every day. The seventh cut was longer. It marked the end of the week. The beginning of each month was also a longer cut.

One day, when I was thinking about my situation, I realized I had a lot of negative thoughts. It wasn’t good. I decided to do something about it. I made a list of all good and bad things that happened to me.

I was alone on this island and I had little hope of ever going back to civilization. On the other hand, I was saved and I didn’t die in the storm which killed my friends. I had food to eat. I didn’t have a lot of clothes, but the weather was such that I hardly needed any. I had a dog. He understood some words. He understood when I said, “Sit down. Come here. Bring it. Don’t do it. Don’t jump. Let’s eat. Let’s run.”

This list helped me realize that all bad things come with something good in them.

I tried to concentrate on positive things only. I continued to make my place better and better. I made the cave bigger. More space in the cave helped me keep all my things organized.