I stayed in my place behind the tree. When one of the goats was close to me, I jumped up and I caught its leg.

I was holding the goat for two seconds. But then the goat kicked me with its second leg in my nose. It hurt a lot. I let the goat go and the goat was soon gone.

We weren’t successful. This wasn’t a good way to catch a goat. We had to do it differently. I told my dog, “Let’s go home. I need some rest.”

I spent the period between January and March working on my fence. It took me a long time because I wanted to make it very thick and strong. Meanwhile I found pigeons on the island. They weren’t nesting in the trees, but in holes of the rocks. This made them easy to capture and their meat was good. I could also cook and eat their eggs. This is what I was surviving on while I was working on my fence.

While cleaning and arranging my home, I found a small bag. There used to be corn inside, but now there were only some leaves and dust at the bottom of it. I emptied it outside my fence because I needed the bag for gunpowder. This was just before the rains. About a month later I was surprised to find a few green leaves growing there. It was young corn. 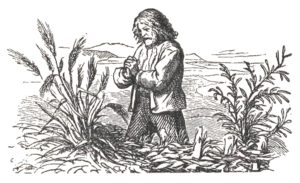 Words couldn’t express how happy I was to discover corn growing just outside my fence. It was fantastic. I could bake bread in the future.

On the 16th of March, I was inside my house when I saw pieces of earth falling from the roof of my cave. I was frightened and thought all my efforts would be lost again. I ran outside the cave. Suddenly I noticed the ground was shaking everywhere. It was an earthquake!

I was paralyzed with fear. Some big stones were falling from the hill. But I was lucky. They didn’t hit my tent.

Although the earthquake was soon over, I was afraid to go inside the cave. I was sitting on the ground in front of my tent still very upset and scared to enter.

I started to think that it was better not to sleep in the cave. It wasn’t very safe in case another earthquake came. But I didn’t want to sleep in the tent. So I decided to make a house instead of the tent. I wanted to use the cave only as a cellar.

I was ill in the last week of July. I had a temperature. I couldn’t get out of the bed. I was very weak. I could do nothing in that state. I had crazy dreams. The dreams weren’t very logical. But for me they were real when I had them.