During my fourth year on the island my clothes were already very old. Instead I began using the skins of the animals I killed. I made myself a cap and some other clothes entirely out of those skins. They kept me cool in the heat and protected me from the heavy rain. But the clothes weren’t enough. I also needed an umbrella for the same purposes. It took me a while but I succeeded in making one.

I continued living like that for the next 5 years. I kept on growing my corn. I continued drying grapes to make raisins. All my activities remained the same.

It was the 6th of June on the sixth year of my stay on the island that I started this trip. I faced danger as soon as I started my journey.

I had to go around some rocks in the sea. 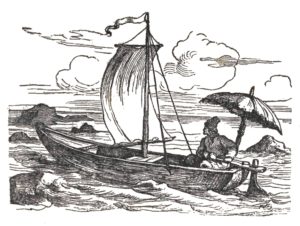 When I wanted to go back to the coast, I realized there was a strong current. The current was taking me away from the island. The situation was horrible. I was scared. I thought, “I will die in the open sea. I didn’t have enough food and water for a long journey.”

Soon, I found a small river which went further inside the island. But I got nowhere because soon the river was very narrow. Stones blocked the way. I couldn’t continue. I got off my canoe. I went to explore this part of the island. It wasn’t far from the part of the island which I knew. I even found the way to my house in the valley. I was so tired from the trip that I fell asleep. I was woken up by a voice. The voice was saying my name, “Robinson, where are you? Robinson, where are you?”

I was scared at first, but then I saw my parrot Poll on top of the hedge. He learnt the phrases I repeated to myself so many times. Now he was saying them with the same intonation I used.  I was surprised to find the parrot here, because I left it in my house. Still, I was happy to hear someone talk to me.

I left the canoe there and returned home with the parrot.

I didn’t take such long trips for a year and I was staying in my house most of the time. I kept on making wooden tools and clay pots. I even found a way to make pots with a wheel, which made my work much lighter. I also figured out how to make a tobacco pipe, which I missed a lot ever since I came to this island.