One day, I also noticed I was running out of the gunpowder. I was worried I wouldn’t be able to kill any more goats once it was gone. The kid I once caught was old. It was too late to try to find a male for her. I wanted meat but I didn’t have the heart to kill her. One day, she died a natural death.

It was eleven years since I first came to this island and all this time I was using gunpowder to provide myself with meat.

Now I thought of finding some other way to supply myself with food.

I decided to make some trap. I didn’t succeed at first, but eventually I caught three young goats.

They were one male and two females. I took them home with me.

I had to make a fence for them because I feared they might run away with the wild ones once they were adult.  It took me three months, but I made a nice fence around a suitable space where there was a lot of grass and water for them.

After some time, the young goats became very calm and they were eating out of my hand. In two years I had a twelve goats, and in three years’ time I had more than twenty goats.

This way I had a lot of milk and meat. I experimented several times and at last I managed to make cheese and butter. My table was full now and I was surrounded by animals. I had my old dog, cats, goats and Poll, my parrot. The only thing I still missed was someone to talk to.

One day I set out to reach that part of the island where the strong current was. On the way there I thought to myself how ridiculous I would have appeared if some Englishman saw me. I had a big hat, a short jacket and short trousers all made out of goatskin. I didn’t have socks or shoes but I put some goatskin around my feet.  I had two belts, one for the gun and knife, and one for the gunpowder. On my back I had a basket. I also carried a gun on my shoulder and an umbrella made out of goatskin above my head. My beard was pretty long. I realized I was looking very unusual from what I used to look years ago. 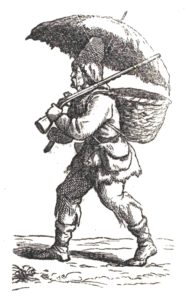 One day, about lunchtime, I was walking on the beach going to check on my canoe when I came across something surprising. I saw the mark of a human footprint on the sand. I looked around but I couldn’t see anyone. I was scared. I hurried back to my home. I was so scared I couldn’t sleep that night. Why was there no canoe? Why were there no more footprints? I thought that maybe it was the footprint of one of the people who probably inhabited the islands around. I began to worry whether they saw my canoe and were now preparing to attack me.

Then I convinced myself that maybe I saw the mark of my own foot and I was a fool to get scared by it. This realization made me feel better. I took my courage and I went to see the footprint again.