The next day in the morning I saw the ship. The ship stopped far from the beach. The ship looked empty. I didn’t understand it. I expected the people who fired the gun yesterday.  I really wanted to communicate to somebody. I missed communication with real people very much.

I took my canoe and I decided to go to the ship to see if there was anybody still alive on board. The ship looked Spanish, and it was completely destroyed. When I got closer, I saw a dog. He was very happy to see me. I gave him bread and I gave him water. He was hungry and extremely thirsty. I found nobody on the ship. “What happened to the men from the ship?” I thought. It was very strange. I didn’t have an answer to this question. It was a mystery.

There were many boxes with different things on the ship. Some boxes were small, some boxes were big. Many of the big boxes had bottles with alcohol in them. But these boxes were too heavy. I couldn’t take them on the canoe. I found guns and gunpowder. I took them to the canoe. I also found some other useful things.

I returned to the island in the evening with several small boxes on my canoe. I had some new shirts and also gold, silver and a lot of gunpowder.

Gunpowder was important to me. On the island, it was more valuable than any money or precious metals. There was something else which I needed very much and that was shoes. I found two pairs of shoes on board the ship. I took them with me.

I put all my new things in the cave. I made five trips to the ship. I took everything useful for me. Then I hid the canoe again and went back to my house. Everything went back to normal. Time went quickly. I often thought about the men from the ship and the cannibals on the beach.

These thoughts were always in the back of my mind, day and night.

It was one night in March when I dreamed that 2 canoes with cannibals landed on the beach. One of their victims ran away and came to my house where I saved him. Then we became friends. He helped me navigate out of the dangerous currents around the island.

I woke up, but the dream stayed in my mind. I realized that if I had somebody to help me I might be able to escape from the island and reach the continent. Maybe I could save one of the victims brought to this island.

I decided to look out for the cannibals and for the next year and a half I went daily around the beach, hoping to see canoes.

This finally happened one morning. I saw 5 canoes with more than thirty men on the beach. I couldn’t attack them because they were too many. So I just waited. I was observing them through my telescope. 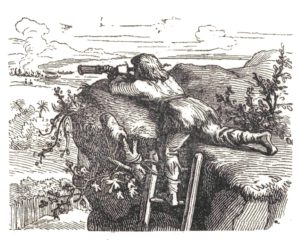 They made a fire and they were dancing around it. I also saw two men, the victims, tied together.

The two tied men were taken to the fire after a while. One was beaten and killed. The cannibals painted their bodies with his blood. It was like a theatre. But this wasn’t a theatre. It was real. It was horrible. But I couldn’t do anything. There were too many cannibals.

The second man waited on the side. When the cannibals didn’t look, the second man jumped up and he started to run away. He was running in my direction. I ran to the beach and I hid behind a tree.

I saw that he was followed only by two cannibals. This was the right moment to save the prisoner.

The man ran as fast as possible but the cannibals were closer and closer to him. Their speed was faster than his.