When the Spanish was inside the canoe, Friday jumped out of the canoe and guided it along the beach faster than I could walk.

We soon reached the place where I saved Friday. Friday helped our new guests out of the canoe. But they weren’t able to walk. We had to carry them to our home. 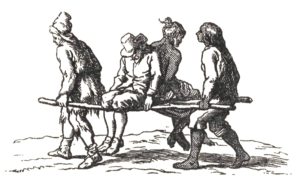 We had another problem when we reached the house. Friday’s father and the Spanish couldn’t go over the fence or climb a ladder and I didn’t want to destroy the fence. I wanted to pull them over the fence. But then I realized the cannibals were already gone. We could stay outside the fence.

We made a comfortable tent for them outside the fence and prepared soft beds for them too.

As soon as we finished this, I started cooking dinner. Friday brought some fish and we cooked them quickly. We all had dinner together in the tent. Friday was my interpreter because the Spanish spoke the language of Friday’s people.

After that I asked Friday to go back to the beach and bring us the weapons we left in our hurry. I also asked him to bury the bodies of the killed cannibals the next day.  He did as I said, so later when I went to the beach I could hardly recognize the place if it wasn’t for the big tree behind which we were hidden.

The next morning I asked Friday’s father what he thought of the cannibals returning to kill us. He said our guns created a great shock. They didn’t know how we won the battle using them. He said he heard them shout in their language that Friday and I were spirits sent from heaven to punish them with fire.

I was still worried the cannibals might return with a bigger army, but nothing of the kind happened.

When our guests were strong enough, I began to think about the journey by sea again. I asked the Spanish about his arrival on these islands and he said that he was on a Spanish ship going to Havana. There were sixteen Europeans, Spanish and Portuguese, on Friday’s home island.

He told me that the storm broke the ship near my island. They saved themselves in a boat. Now they lived with Friday’s people.

I asked the Spanish whether they tried to make another sea journey. Of course they wanted to go home, but he said that they had no tools with which to build another ship. I showed the Spanish the tools which I had from the ship. He said that with my tools it was possible to build a ship.

I thought the Spanish and Friday’s father could return to their island. They could tell other Europeans about the possibility to build a ship. Together we could go to Brazil or Havana or maybe Europe.

However, the Spanish suggested something else. He told me that it would be better to wait for at least half a year, because there wasn’t enough food for sixteen more men on my island.  We wouldn’t have enough food to eat while building the ship, and much less to take with us for the long journey.

The Spanish advised me to plant more corn and he and Friday’s father helped us expand the fences and fields. 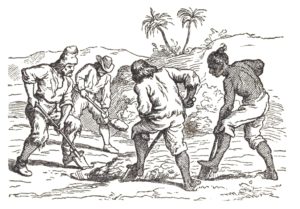 We caught more goats. We increased the number of goats to 50 animals. We collected a lot of fruit. Then we dried the fruit.

We started preparing the materials for the ship. We chose a few trees and I showed them how to cut them to form long boards.

In half a year, we had a lot of food. We had so much corn that we needed more baskets and pots to store it all. We saw that the Spanish was very good at making baskets. He had a great talent. His baskets were excellent. He also used a special technique to make baskets. The technique was fast and effective. He made the baskets three times faster than me. I asked him to teach me his skill. I wasn’t as fast as him. But I was faster than before.