We put all the food in my cave. It was safe there. Then the Spanish and Friday’s father could go back. They could bring the other men here. We gave them food and four guns in case they were attacked again. Then they took the canoe and they went away. 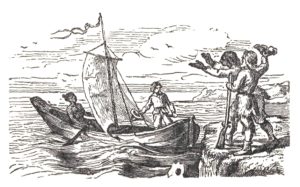 Two days passed since they left when something unexpected happened. I was woken up by Friday at about 6 o’clock in the morning. “Are they here?” I asked Friday. He said, “Not yet. But somebody else is here. I saw a boat.” I went to the top of the nearest hill. I saw the boat. It was clear that these people weren’t the friends who we expected. The boat came from a completely different direction. I could also see a ship. I knew this shape. The ship was English. I was confused. On one hand, I was happy to see Englishmen after twenty-seven years on the island. On the other hand, I was concerned because the island was quite out of the way of any English ship. Recently there were no storms which could have taken them here. Perhaps they were pirates or murderers and were hiding here. All this made me very cautious. Friday and I remained hiding, observing them for a while. The boat approached the beach and I counted eleven men, they were all Englishmen. Three of the men had hands tied together. The eight other men took them to the beach. Two prisoners were calm, but the third prisoner tried to say something. He looked very scared. He asked the men in the boat for something. On seeing this, Friday turned to me and told me that it seemed Englishmen were also eating people. I told him that they didn’t have the slightest intention of eating them. Instead I thought they were going to shoot them. After a while I noticed this wasn’t the case. The people from the boat went exploring the island, while the three tied prisoners were sitting at the beach with two men as guards. They looked desperate. The situation made me think of my own arrival on the island. Just like those prisoners I felt lost at first.

Soon the tide was low and the boat they came with was stuck in the sand. They couldn’t move it, so I heard them shout to each other that they would leave with the next tide. This gave me ten hours.

The night was approaching, so we would get an opportunity to go near them and overhear their conversations. Now I was sure they came here to leave those three men here as a punishment.

Friday and I stayed hidden until dark. I noticed the men who stood guard were asleep and the three prisoners were sitting under a tree quite close to us. It seemed to me they were also out of sight from the other sailors, so I could approach them without being seen. I went to them with Friday following closely behind me.

When we were very close to them, I spoke quietly to them. We were still hidden behind the trees and they couldn’t see us. When they heard my voice, they couldn’t believe somebody spoke English to them from the dark forest.

“What was that?” asked one of the men.

“I heard something. I heard a tree speak,” answered the other. “But it is impossible. A tree can’t speak English.”

“Yes, you heard something but it isn’t a tree,” I said quietly. “My name is Robinson Crusoe. I am an Englishman. I live on this island. I will help you if you tell me who you are.”

After the initial shock was over, one of them answered my questions. He was the captain of the ship, but some of the sailors started a mutiny. He, his assistant and a passenger were taken prisoners. The other sailors were going to leave them on this island to starve to death.

The captain told me that there were only two dangerous sailors who took control over the others in this group. If the leaders were captured, the rest would return under the command of the captain.