I was young and strong. I became a slave to the captain of the pirates. I felt very sad.

I was hoping the captain would take me with him when he went to sea. And when a Spanish or a Portuguese captain attacked him, I could be free. But this didn’t happen because the captain left me to look after his garden every time he went to sea. 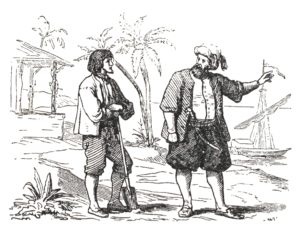 One day, I met a young woman in the house. She was so beautiful. She was also a slave and she cleaned the house. I tried to speak to her but she didn’t speak my language. But I felt that she understood me. I liked her very much. She was very attractive to me. Any time she saw me, she always smiled at me.

Sometimes she touched me when she was close to me but it was only a short moment. If the captain saw it, he could send her away.

She was on my mind very often. I wanted to meet her every day but she wasn’t in the house every day. When I thought of her, I felt a nice feeling in my heart. I knew I fell in love with that woman. But our relationship was complicated. We couldn’t be officially together. Slaves couldn’t have relationships. It was so sad.

Sometimes when the captain went fishing, he took me and a boy to help him. Sometimes he even sent me and the boy with one of his relatives fishing in a small boat.

One morning when we were fishing, thick fog came and we were lost. We struggled to reach the coast the whole day and the following night, but it was only the next morning that we finally got back. After this adventure, the captain decided to use a bigger boat, the one from our English ship, and make it more comfortable. It had a cabin in the middle of it and it had good sailing equipment.

One day the captain ordered me to put extra food, drinks and guns on the boat because he was expecting some important guests to join him for fishing. They also wanted to do some hunting later. However, the guests refused the offer at the last moment.

Then, the captain told me, “Prepare the boat for fishing for the next day.”

Then the morning came. I hoped that I could see the young woman in the house. I couldn’t leave without seeing her for at least a short moment. Then I saw her. She was the most beautiful woman in my life.

When I looked at her, our eyes met. She knew something was wrong. Maybe she understood that was our last moment together. She looked deeply in my eyes, then she touched my hand. Her face was sad and my face was sad too. She smiled at me a little. Then she went away. This was the last moment I saw her.

One hour later, we were ready. I and the boy went to the boat. One of the captain’s relatives went with us. He was our boss for that day. Soon, we were far from the land. I pretended that I couldn’t catch fish. Then our boss told us to go further from the land. He thought we could catch fish there.