For the next ten days we sailed close to the land. We stopped only to fill our bottles with fresh water. Soon we started to notice the land was inhabited. Several times we saw people on the beach who were watching us. I wanted to stop and go to them, but the boy asked me not to do it.

But then, one group of these people looked very friendly. I waved to them. I tried to sign to the people that we needed food. They signed to me to come to the beach. Two of them ran into the forest. They returned with some dry meat. We didn’t want approach the land, and they were too afraid to swim to us, so we didn’t know how to reach the food. When the people saw this, they stepped back and were soon quite far from the food. We approached the food and took it on board.

Then, we weren’t scared of them. They came to us. We thanked them but we had nothing for them.

At that moment, we saw two animals which were running down the hill. The people were scared. One animal attacked a young girl. I shot at it and I killed the animal. The second animal was scared and it ran away.

On the eleventh day, we saw a long piece of land which was extending very far into the sea. There were also some islands far in the sea. I was thinking about going to the islands. Then the boy shouted, “Look! There is a ship!”

And really there was a ship quite far at the horizon.

The boy was really scared. He thought it was a pirate ship. But I looked at the ship properly. It looked Portuguese. The ship was going away from us. Nobody on the ship saw us. So I fired a gun.

They heard the gun. Then they saw us. They turned the ship and went to us. Soon we were on the Portuguese ship. 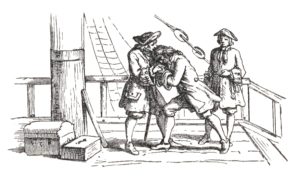 They spoke Portuguese, Spanish and French. But I didn’t understand them. Fortunately, there was a Scottish sailor on the ship. He came to me. I told him our story. Then all the sailors started to be very nice to us. They agreed to take me and the boy on the ship. We were both very happy. We offered our things to the captain. But he didn’t want to take them. He wanted to pay for them instead. It was very nice of him. I told him he could buy our boat which I gave him a good price for. I asked for a half of usual price. He could take the rest of the things for free. The captain agreed.

The captain also wanted to train the boy as a sailor. I didn’t like this idea. I thought he was too young for this job. I thought the boy also needed freedom. He didn’t need to start another service.