One day, three of my friends came to our house. 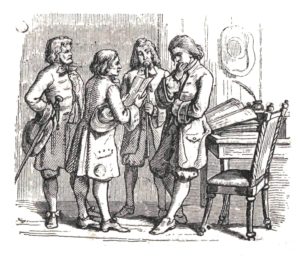 We started to prepare all the necessary things for the journey. Soon we were ready to go. I said goodbye to my wife and we started our journey. Our plan was to be back in two months.

We left Brazil on the first of September sixteen fifty-five. Our ship was very big but we were only seventeen men. The ship was full of things for business. We had cups, glass, mirrors, knives and other products.

At the beginning of our journey the weather was very good, but very hot. In one week, a hurricane came and it was threatening our ship for the next twelve days. After the hurricane passed, we saw we went quite far from our original journey and were instead close to the northern part of Brazil near the Orinoco River. The ship was so badly damaged we could no longer go to Africa.

When we started this short trip, a second hurricane came. The next morning one of the sailors cried out, “Land!” and at that moment the ship stopped in shallow water. We expected the ship to break apart at any moment because of the strong wind, so we all got into the small boat the ship carried. This was very dangerous because the seventeen of us were crowded in the boat, and it had no sail.

The waves were very big. The wind was extremely strong. The wind pushed us to big rocks. We knew the crash was close.

Suddenly, a huge wave appeared and overturned the boat. I was covered with water and couldn’t breathe. I couldn’t see the others or the boat. But I saw a little beach between the rocks.

Another wave carried me to the beach. I was half-dead with all the water that came into my body. I was still in water, but I felt a land under my feet. I could hardly move, but I knew I had to go further onto the land. I didn’t want another wave to carry me back into the sea. Before I could get to my feet, another wave came, and I was washed into the water. I couldn’t breathe for a while. But then another wave threw me back on the beach.

I tried to get up. I tried to go further from the sea. I was able to move ten metres up. I was safe. But my arms and legs were very weak. I collapsed and I was lying on the beach.

After some time I got up. I looked for the others. I couldn’t find the other men. I was probably the only person alive. All my friends were dead. I only found three hats and two shoes on the beach. It was horrible for me.

The weather was still very bad, but the waves weren’t as big anymore, and I could see the ship. It was far from the land.

I looked around and noticed I had almost nothing. I was wet and had no other clothes. I had nothing to eat or drink and nothing with which to defend myself if an animal attacked me.