All I found in my pockets was a knife, and a little box with tobacco. The situation was really bad. How could I possibly survive with only these things?

Before sunset I explored the place and I was looking for some fresh water. I found it in a small river.

Then I made myself a weapon from a short stick to protect myself against dangerous animals.

I decided to spend the night up in a tree. When I woke up the next morning, the sea was calm. I was surprised to discover that the waves moved the ship. The ship was now very close to the rocks where I almost died last night. The ship wasn’t moving.

I took off my clothes and I swam to the ship. I didn’t see any way to get inside the big ship, so I swam around it twice. The second time I saw a rope which was hanging on one side. I used it to climb up and when I was on board, I began to search for food and tools I could use.

I was very lucky because some of the food on the ship was dry. I went into the kitchen and filled my pockets with biscuits. I was eating them while I was exploring the other cabins.

I also found a bottle of rum which I took with me. There was no other boat on the ship and I needed one to carry the food and tools to the beach. That’s why I took some boards and I made a raft. I discovered three big wooden boxes and I put them on my raft. I filled the first one with the bread, cheese and meat I found. I found some more bottles of alcohol which I also put on the raft.

Then I heard something. Somebody was on the ship. Who was it? Somebody from my friends? It wasn’t possible. My friends were all dead. I was a little scared. I went to the place where I heard the noises. Then I saw who it was. It was a dog. It was a dog of our captain. Now, I had a friend. I wasn’t alone anymore.

Then I noticed the tide was getting high again and the clothes which I left on the beach were already in water. I was still on the ship, so I looked for more clothes.

When I was looking for clothes, I found a box with some tools. I also found a nice carpet next to the box. Then I looked for guns which I needed to protect myself and to hunt. I found 4 guns and 3 boxes of gunpowder. Two of them were dry. I put all these things on my raft. The sea was calm, the tide was rising and the wind was blowing to the land. 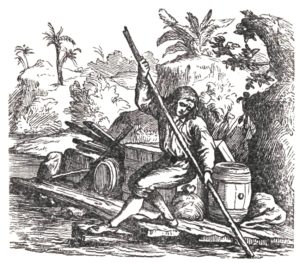 Soon I was back on the beach. I started to look for a place where I could stay.

I saw a hill. I thought that from the hill I could see where I was. I took a gun and some gunpowder and I started walking to it. When I was on the top, I saw sea around the whole place. I was on an island.

I could see two small islands near. One was to the north. One was to the west. I also saw a big land to the south. It was about 100 kilometres far. I saw nothing to the east. I saw only the ocean.

I couldn’t see any sign of people on my island, only wild animals.