I saw many birds on the way back from the hill. I didn’t recognize them. I killed one but its meat wasn’t good.

I went back to the raft. I spent the rest of the day pulling the boxes and my other discoveries further into the land. While I was working, I was thinking that I had to go back to the ship again. I had to get everything useful which was on it because the first storm might break it into pieces.

I had to make myself a place for the night. I made a kind of a tent. 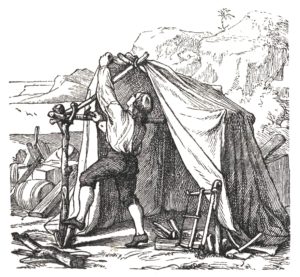 I brought all the things which could be destroyed by rain or sun inside the tent. The night was close. I put some clothes on the ground. I wanted to sleep on them. I also put four guns around me. Then, I felt safe. I was tired from all the work. I fell asleep very soon.

The next day, I left my clothes in the tent and I swam back to the ship. On board I made a second raft. I found a couple of bags with nails. There were also 7 guns, bullets for them, and some more gunpowder. I took all the clothes I could find. There were also some beds which I thought could be useful to me. I brought all this safely to the beach.

From then on, I went to the ship every day. In this way I brought many useful tools and objects. The third time I went I brought as many ropes and sails as I could carry. Some days later I discovered more bread and rum, and also some sugar. All of this I brought back with me to the beach.

One day, I discovered a drawer full of scissors, knives and forks. There were also some coins from Europe and Brazil there. I knew the money was worthless on the island, but still I took it. 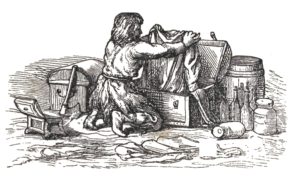 I also found playing cards with pictures of the king and the queen. “I may have some fun with the cards,” I thought.

It was my twelves visit to the ship. The next day, I went to the ship but the sky was getting dark. Clouds were gathering and the wind was getting stronger. I knew it was no use making a raft when a storm was approaching. So I swam back to the beach. That night the wind was very strong but I was safe inside my little tent.

The next morning the ship was gone.

I knew I had to make myself a better place where I would be more comfortable. I knew I could stay on the island for a long time. I wanted to make a nice place for me to live. I also needed to be safe.

I could look for a cave. Or I could make a bigger tent. Maybe I could do both. I needed a place which was close to fresh water, which was hidden from the heat of the sun, and was easy to protect from both people and animals. Last but not least, it had to have a view of the sea, so I could easily see a ship passing nearby.

I found a nice place next to a steep hill and I decided to put my tent there. The hill protected me from one side and I built a fence on all other sides. 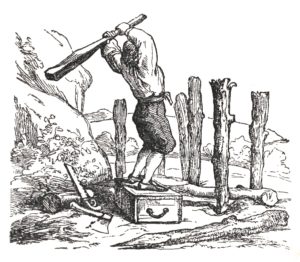 There was no door, but I was using a short ladder to go over the fence, which I then took with me inside. I brought all my stuff inside and made two tents, a small tent and a big one.